Deck The Halls With A Merry Scrapbook Page Tutorial 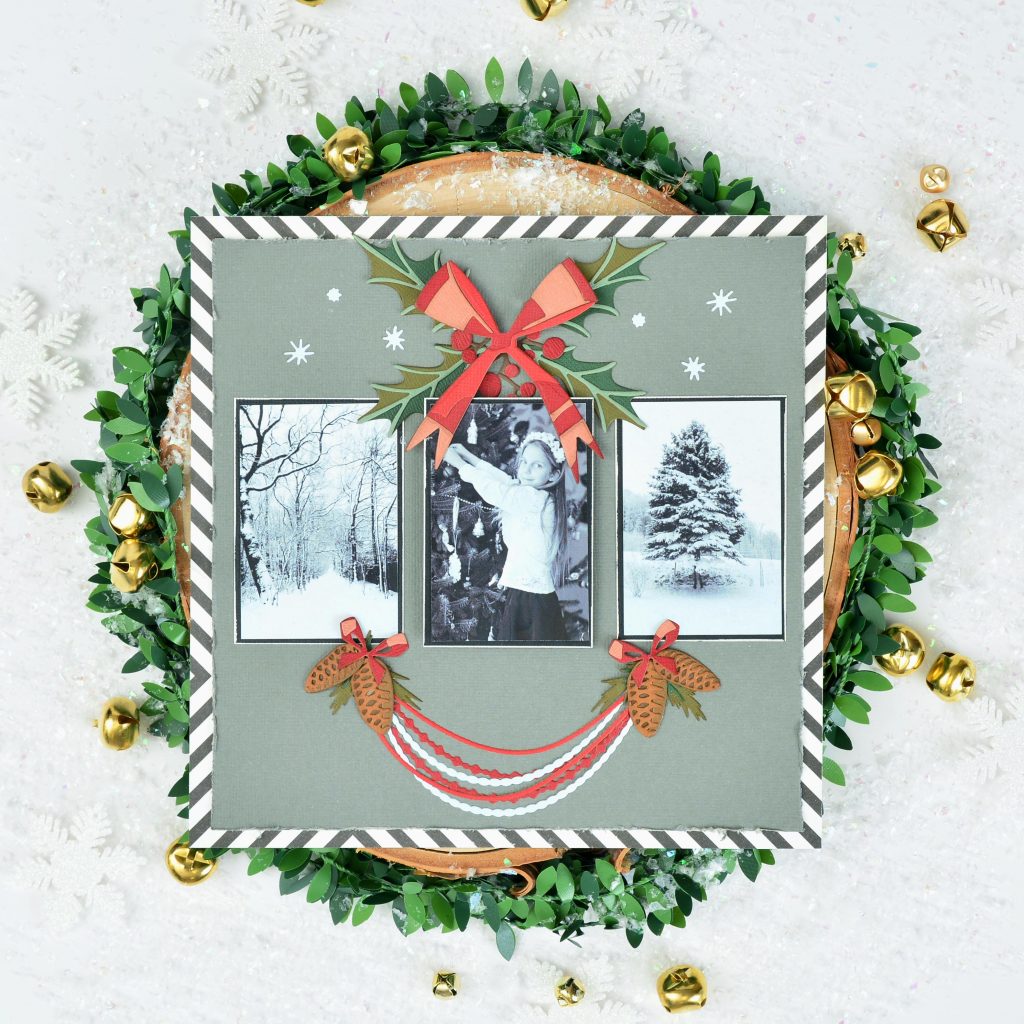 Hello everyone! It's Alexis from the Creative Team. Today I wanted to share  a festive scrapbook page I created using Tim Holt'z Chapter 4 Deck The Halls Thinlits dies. One of my favorite ways to recollect the holiday spirit is through scrapbooking. Whether it's priceless nights building gingerbread houses, days spent playing in the snow or even just family holiday photos, scrapbooks provide the perfect way to meld journaling and memory keeping. Let's see what you will need to get this project started: 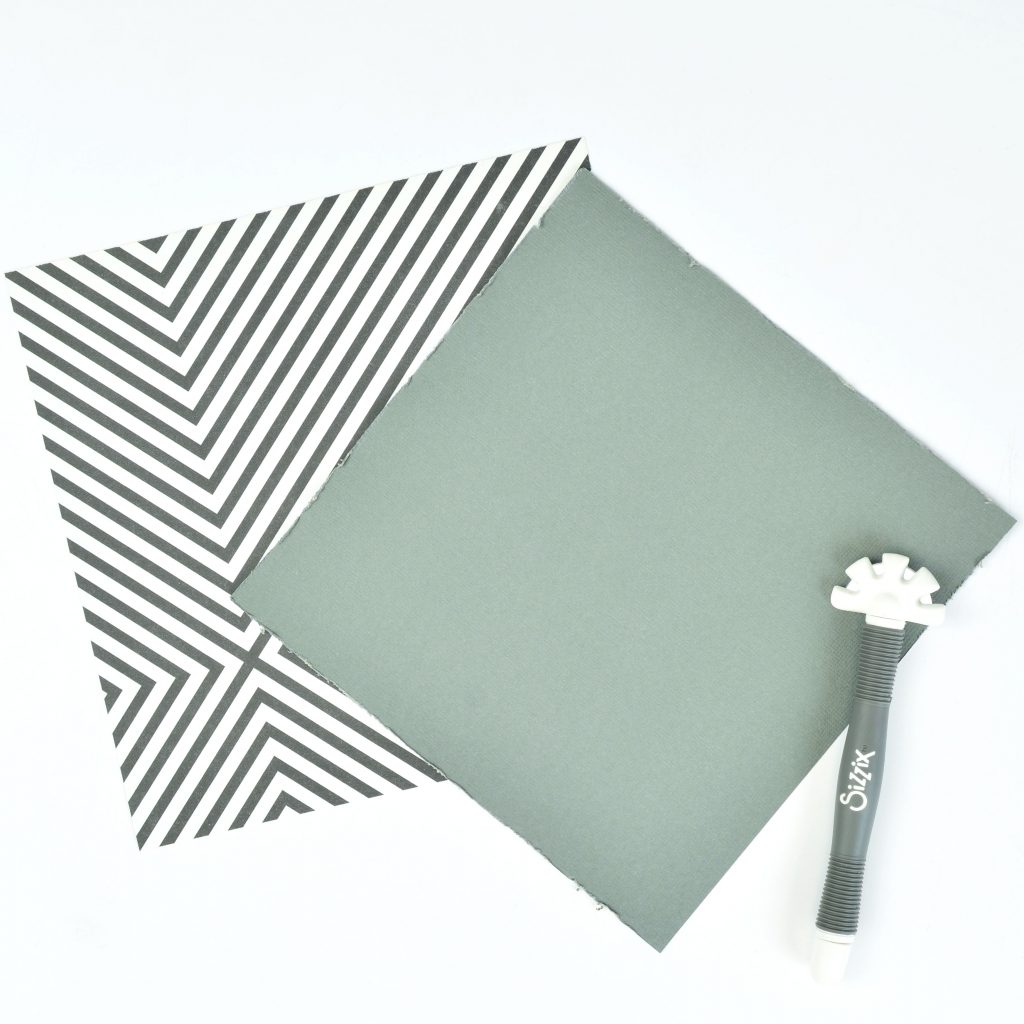 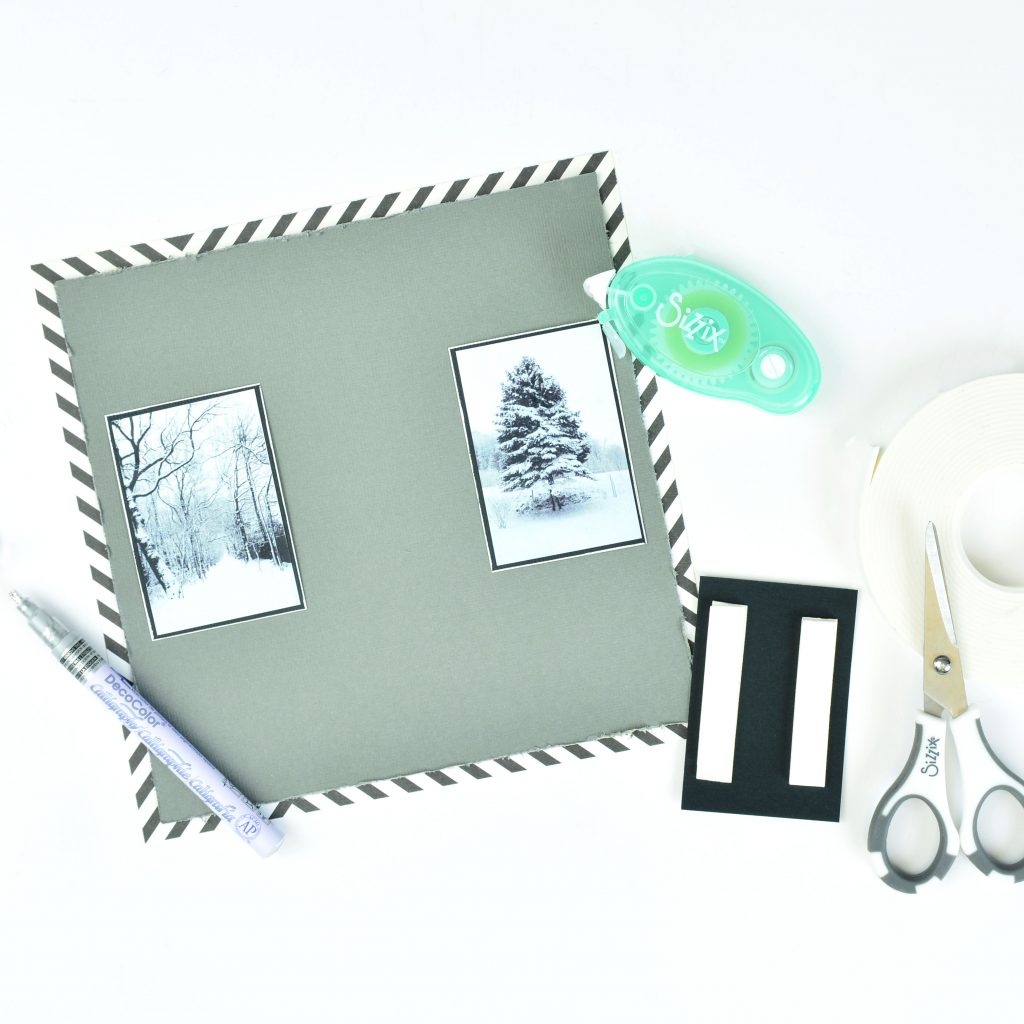 Cut three photographs down to the same desired size. Cut and adhere a black photo mat to fit behind each photograph. Adhere two photos to the middle of the gray panel with double-sided ahdesive, one on the right-hand side and the other on the left-hand side. For the center photo, adhere foam tape to the back of the mat and center and adhere the photo in the middle of the other two photos. 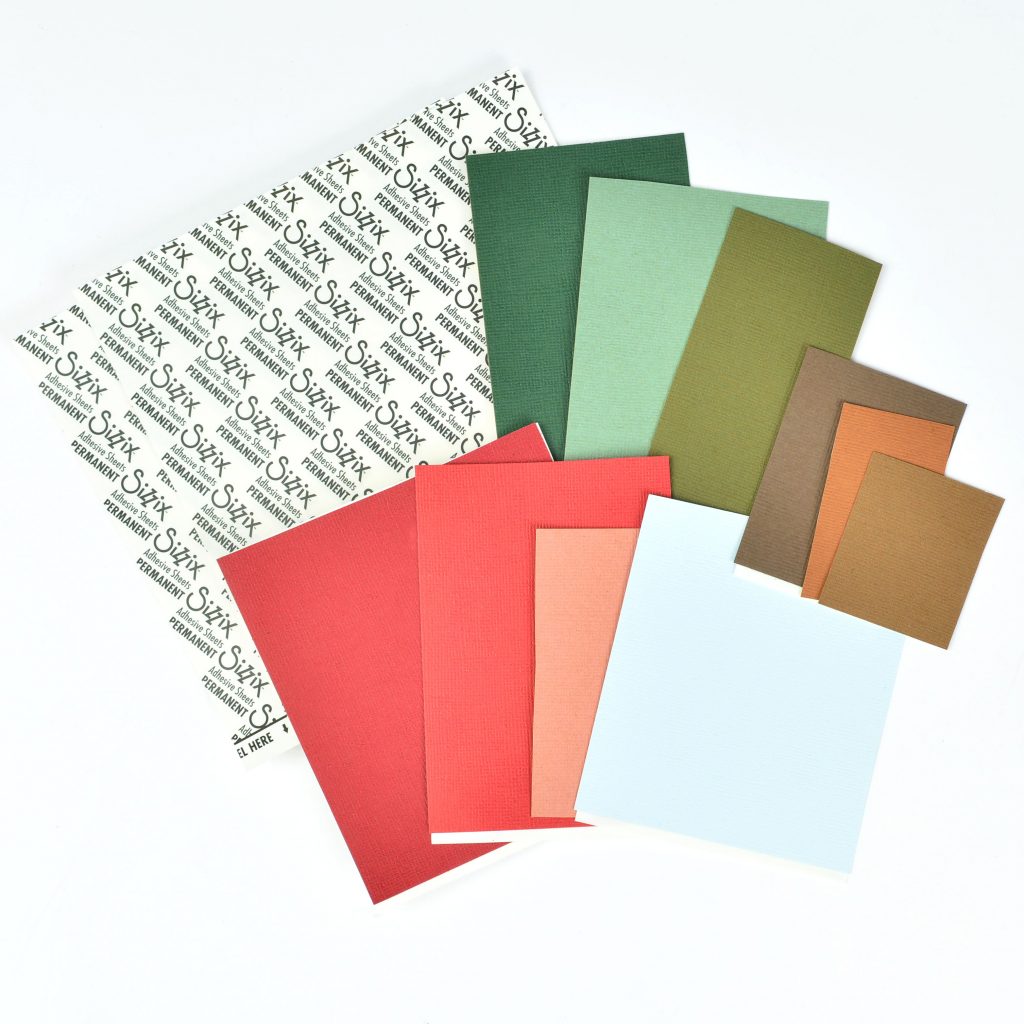 Select a variety of cardstock colors, following the suggested shades on the back of each Thinlit in the Deck The Halls die set. Adhere Sizzix Adhesive Sheets to the backside of each color of cardstock. Adhesive Sheets will help immensely with the assembly of the various layers and intricate details. 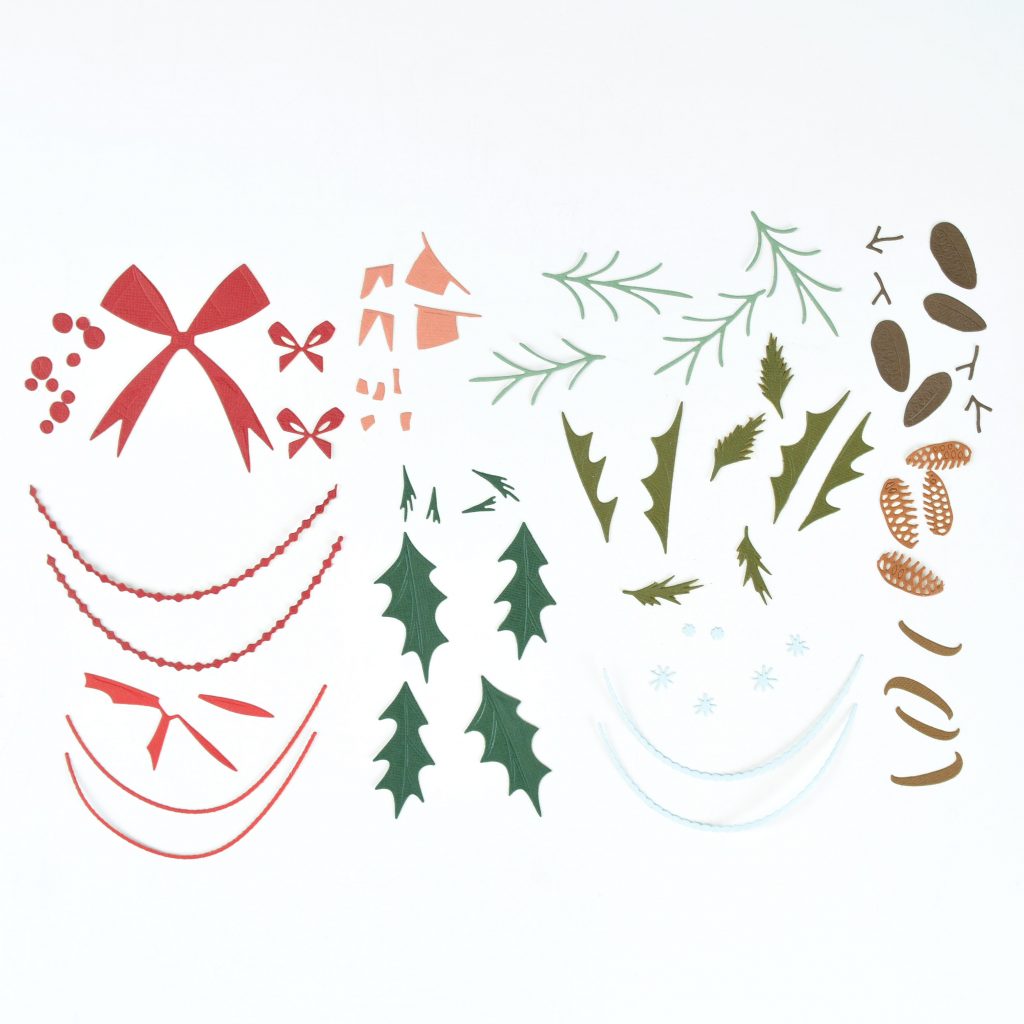 Die-cut out of the adhesive-backed cardstock all of the elements needed, following the numbers on the back of each die. 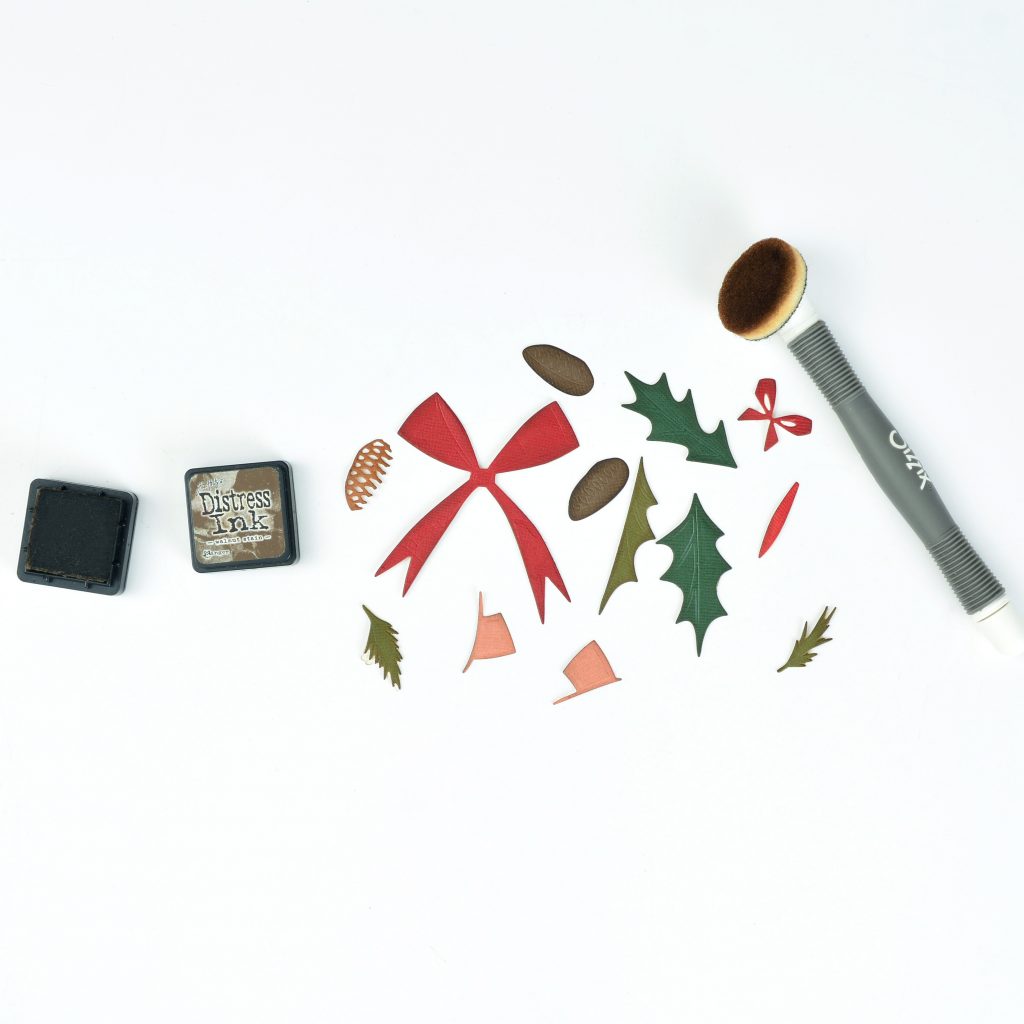 With the Blending Tool Head, apply brown ink to the edge of the bow, leaf and pine cone die cut elements to add various shades of depth and distress. 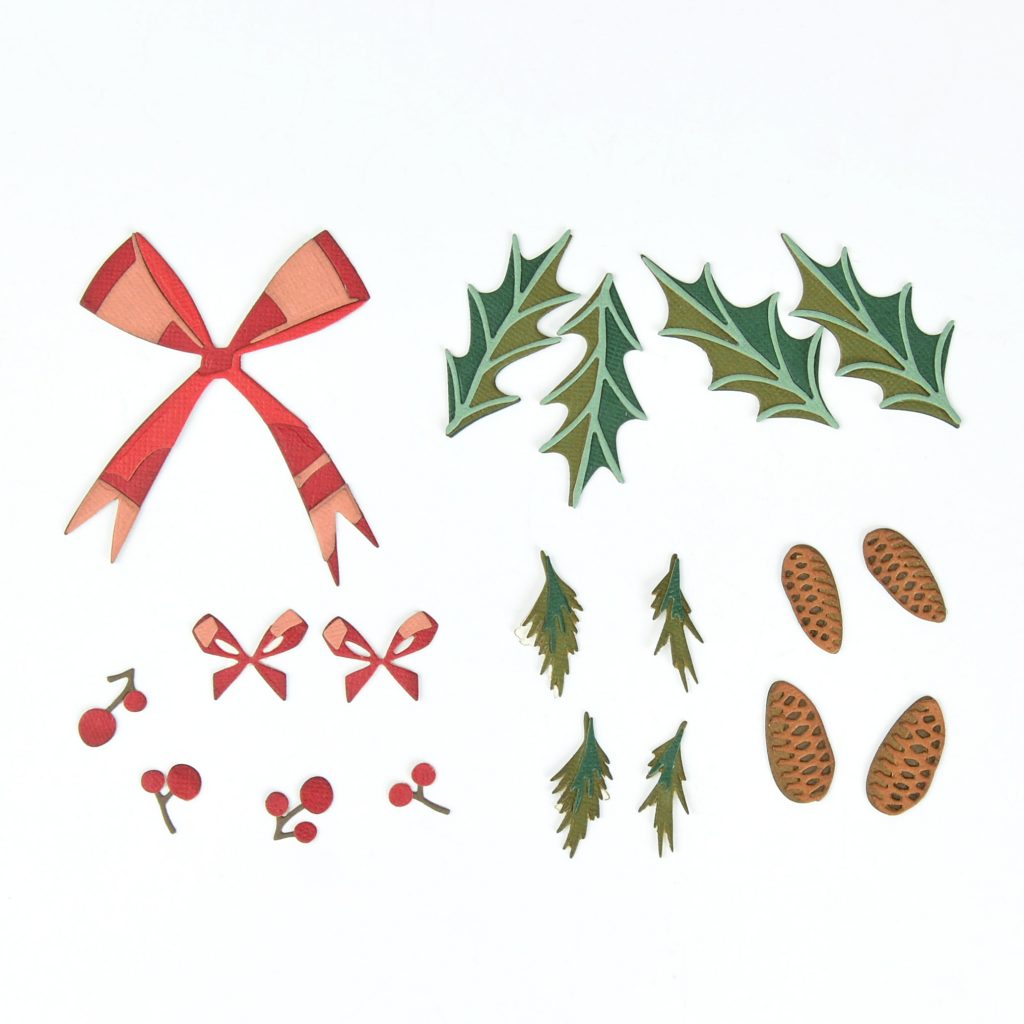 Remove the adhesive backing from the various die cut elements and layer the pieces together following the embossing lines left from the crease blades. Each crease blade line will help identify where to place each layer. (*Note, it is useful to have a pair of tweezers on hand to assemble the various elements.) 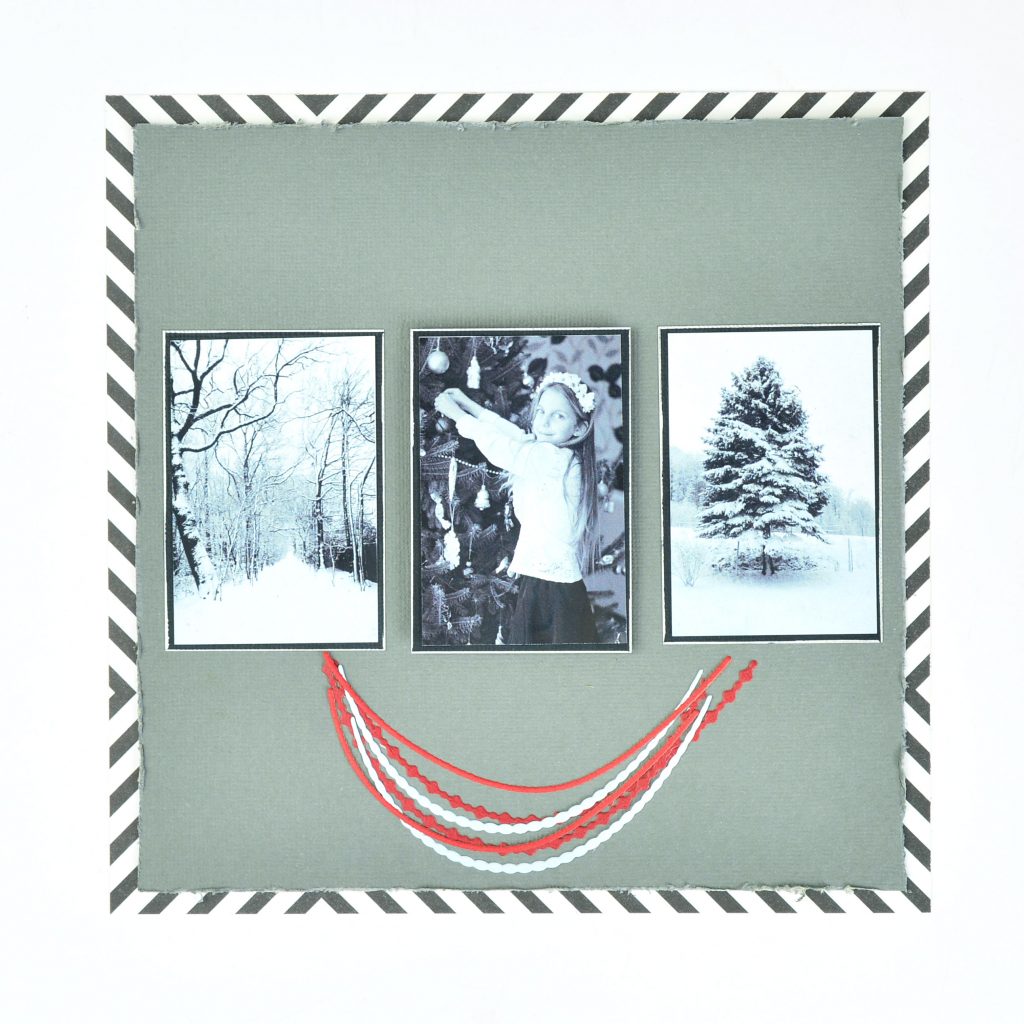 Remove the adhesive backing from the six ribbon banners. Center, layer and adhere each banner as desired below the three photographs on the gray panel. 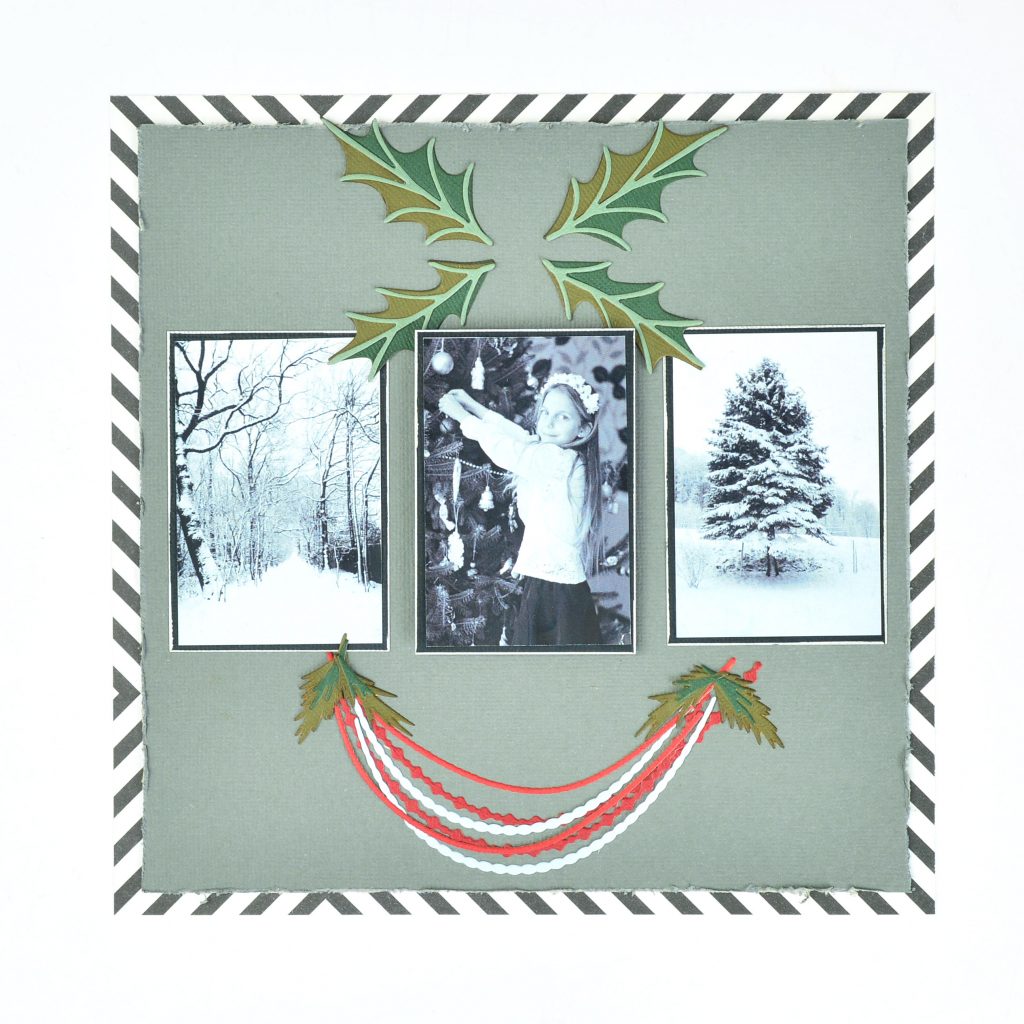 Above the center photo, adhere the four large holly leaves in the shape of a rectangle. Leave enough room in the center to apply the large bow. Adhere two small leaves to either side of the banner pieces. 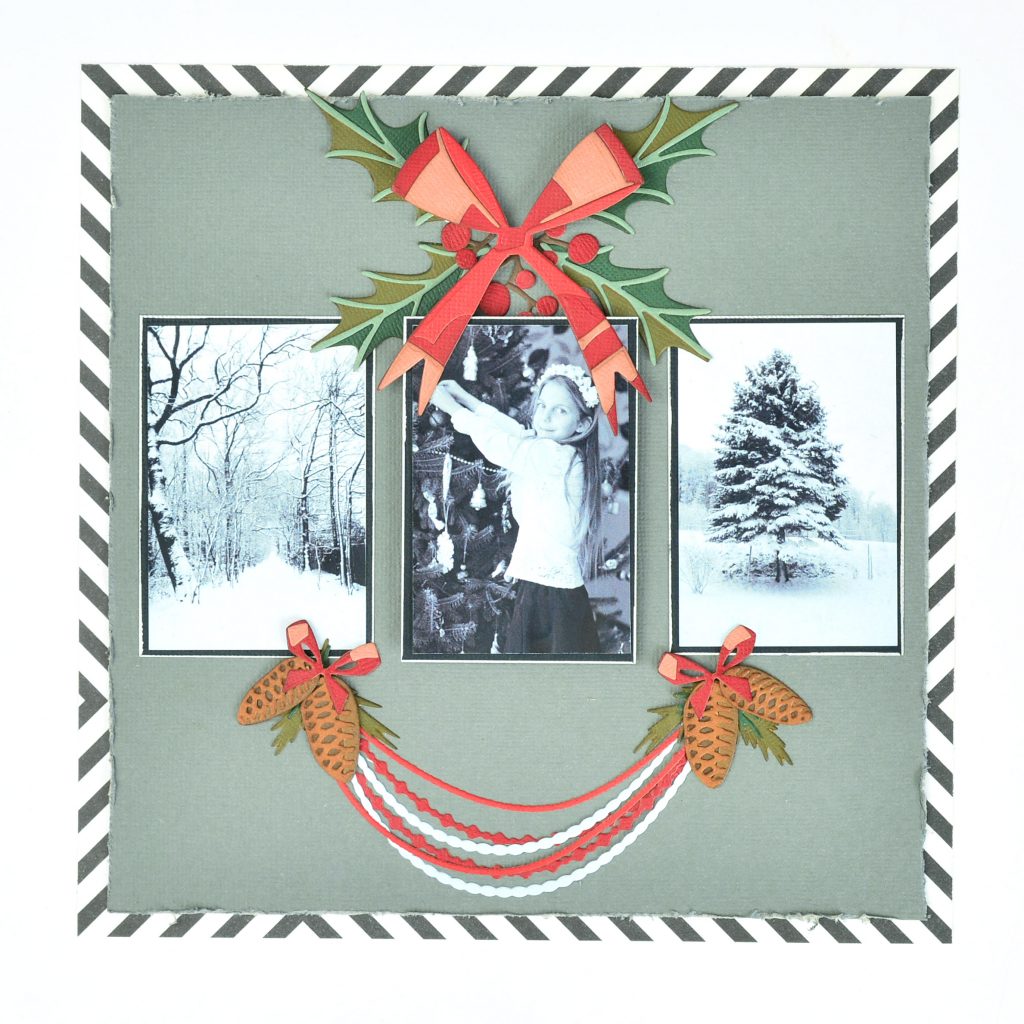 Adhere the large bow in the center of the four large holly leaves.(*Note: Add a small bit of foam tape behind the two upper bow pieces so that the bow lies at the same height as the center photograph).  Adhere berry branches around the bow as desired. Adhere two pine cones around the two small leaves on either side of the banner ribbons. On top of the pine cones adhere one small bow. 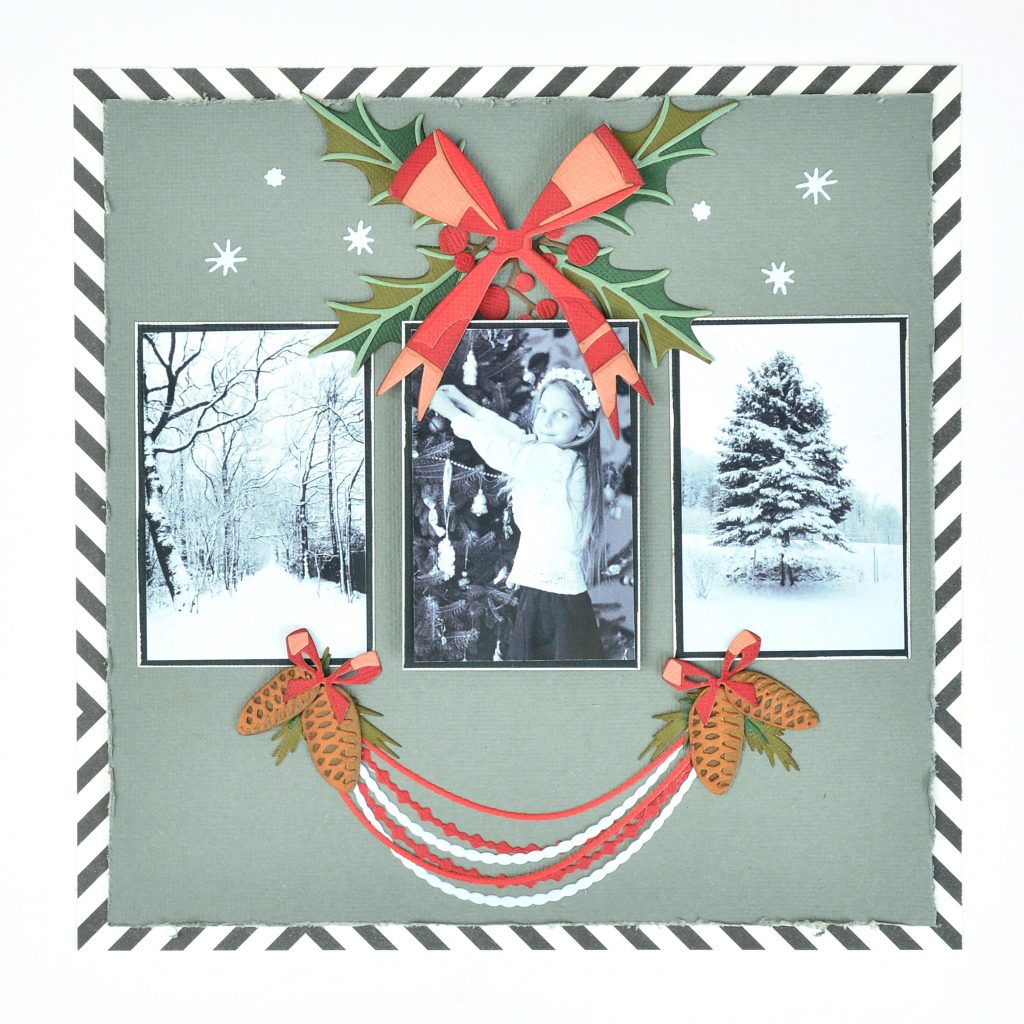 For a final touch, add a few snowflakes around the ribbon and holly leaves at the top of the scrapbook page. 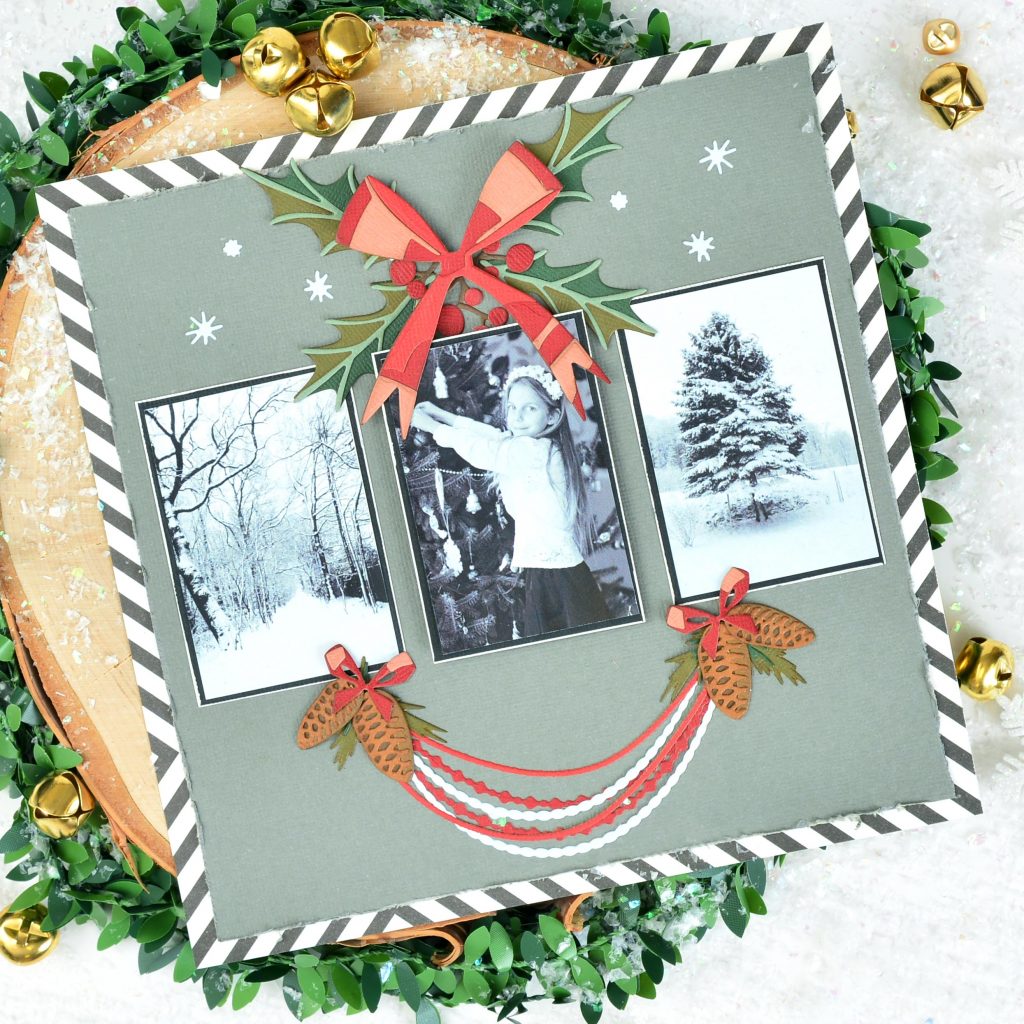 I hope you enjoyed this tutorial! What are your favorite things to scrapbook around the holidays? Do you like to make December Dailies or Mini Books? Let me know in the comments section. Until next time, happy crafting!